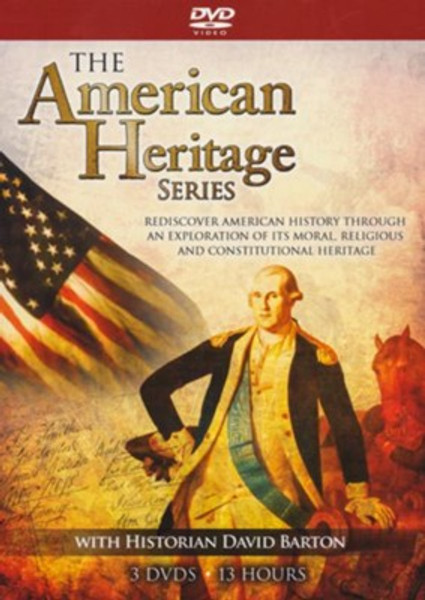 Discover the forgotten and astonishing story of our nation's founding in The American Heritage Series. For centuries, we were taught a providential view of American history that presented our godly heroes and the moral foundation upon which our nation was built. However, in recent years, a new version of history has assaulted the fiber of our nation, censoring the core values of our past - until today!

From separation of church and state to the civil rights movement, from the heroism of our founding fathers to the building of our nation's monuments, this series will inspire every American to reclaim the godly, true story of our nation.

America: this is your heritage!

In this informative 'interactive' DVD series. Learn why history matters, hear the inspirational stories of our great Black Patriots and Founding Fathers, and much, much more with issues such as separation of church and state, the Civil Rights Movement, our nation's monuments and our educational system.

This informative and entertaining collection of 10 DVDs contains 26 episodes for a total of 12 1/2 hours of viewing information.

DVD Titles Include: (click on a title to view more details or to purchase the individual DVDs at $8.45 each)

·Episodes 1-3: "Why History Matters & Unearthing America's Christian Foundations"
·Episodes 4-5: "The Faith of Our Founding Fathers"
·Episodes 6-8: "The Ideas that Birthed Our Nation, Our Biblical Constitution, & Is America a ‘Christian Nation'?"
·Episodes 9-10: "Church, State, & the Real First Amendment"
·Episodes 11-13: "Influence of the Bible in America & How Pastors Shaped Our Independence"
·Episodes 14-16: "When Religion Was Culture, Faith in Our Early Courts, & Myths of the Judiciary"
·Episodes 17-19: "Evidence of America's Spiritual Heritage"
·Episodes 20-21: "Four Centuries of American Education"
·Episodes 22-24: "Great Black Patriots, From Bondage to the Halls of Congress, & The Civil Rights Movement"
·Episodes 25-26: "The Assault on Judeo-Christian Values & The Duty of a Free Citizen"

David Barton is the founder of WallBuilders, an organization dedicated to presenting America's forgotten history and heroes with an emphasis on our moral, religious, and constitutional heritage. He serves as a consultant to state and federal legislators, has participated in several cases at the U.S. Supreme Court, an has been directly involved in the development of the history and social studies standards for states, such as Texas and California. David is also an author of numerous best-selling works and a national award-winning historian who brings a fresh and accurate perspective to history.

"David Barton has done his homework. How refreshing to learn the facts that are sadly omitted in today's public schools. All our kids should learn this to fully appreciate the heritage of this great county and what was in the hearts of our nation's founders. Learn what you should have been taught and gain a new pride and love of our country and why these truths must be taught, lest we forget and become unrecognizable as America. If you have SkyAngel TV, you can watch these shows on The Golden Eagle Channel. "
(G. C. - TN)

"This is a remarkable series. My eyes were opened like never before to the greatness and rich godly heritage we all share as Americans. I highly recommend this DVD series."
(S. T. - CA)

"Everyone who lives in America should see this! It reminded me again of how far away we have drifted from the faith and traditions of the founding fathers."
(H. G. - MA)

"I only wish that these wonderful DVDs could be shown in our public school system. The very fact that they cannot because of "political correctness," illustrates how far we have strayed from the path that our fore-father's laid out in the constitution."
(P. S. - UT)

Aliens, UFO's and the Bible DVD

A Question of Origins DVD

The Master Designer - The Song DVD