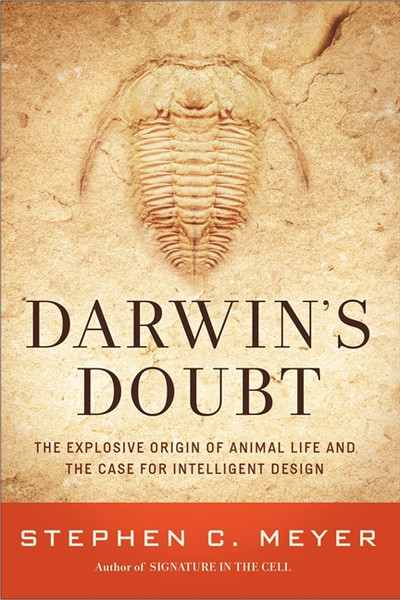 Darwin's Doubt: The Explosive Origin of Animal Life and The Case for Intelligent Design

When Charles Darwin finished The Origin of Species, he thought that he had explained every clue, but one. Though his theory could explain many facts, Darwin knew that there was a significant event in the history of life that his theory did not explain. During this event, the "Cambrian explosion," many animals suddenly appeared in the fossil record without apparent ancestors in earlier layers of rock.

In Darwin's Doubt, Stephen C. Meyer tells the story of the mystery surrounding this explosion of animal life-a mystery that has intensified, not only because the expected ancestors of these animals have not been found, but because scientists have learned more about what it takes to construct an animal. During the last half century, biologists have come to appreciate the central importance of biological information-stored in DNA and elsewhere in cells-to building animal forms.

Expanding on the compelling case he presented in his last book, Signature in the Cell, Meyer argues that the origin of this information, as well as other mysterious features of the Cambrian event, are best explained by intelligent design, rather than purely undirected evolutionary processes.

Dr. Stephen C. Meyer received his Ph.D. from the University of Cambridge in the philosophy of science. A former geophysicist and college professor, he now directs the Center for Science and Culture at the Discovery Institute in Seattle. In 2004, Meyer ignited a firestorm of media and scientific controversy when a biology journal at the Smithsonian Institution published his peer-reviewed scientific article advancing intelligent design. Meyer has been featured on national television and radio programs, including The NewsHour with Jim Lehrer, CBS's Sunday Morning, NBC's Nightly News, ABC's World News, Good Morning America, Nightline, FOX News Live, and the Tavis Smiley show on PBS. He has also been featured in two New York Times front-page stories and has garnered attention in other top-national media.

Signature in the Cell - Paperback Book

The Sovereignty of God by A.W. Pink Paperback Book

Thinking About Christian Apologetics: What It Is and Why We Do It Paperback Book

Darwin: The Voyage that Shook the World DVD