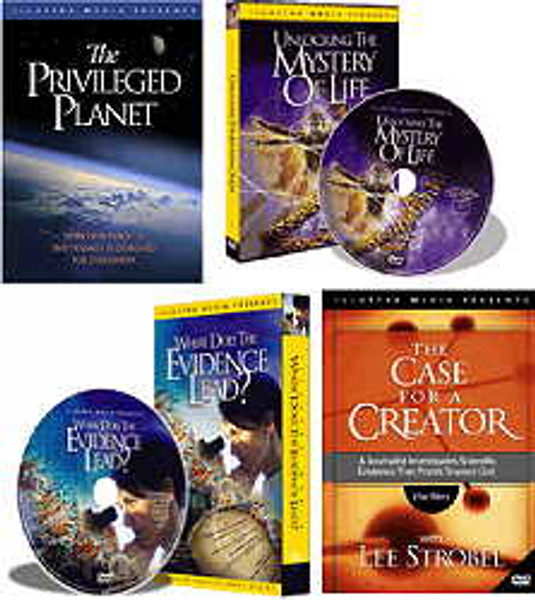 Illustra Media - Premier Producer of Four of the Most Influential Intelligent Design Films Ever Made!

Is Earth merely a speck of dust lost without significance in the universe? Or, is our planet the product of intelligent design? Today, scientific evidence indicates that the many factors that make Earth suitable for complex life also provide the best conditions for astronomical discovery. This thought-provoking DVD explores the intriguing correlation and its implications on our understanding of the origin and purpose of the cosmos.

Based upon the New York Times best-selling book by acclaimed author/journalist, Lee Strobel, this is a remarkable film about Leeâ€™s journey from spiritual skepticism to a profound faith in the God who has etched His indelible signature upon every galaxy and living cell. The Creator now revealed and confirmed by 21st century science.

Is life on Earth the product of purely undirected processes like time, chance and natural selection? Or, can the origin and diversity of living organisms be traced to an intelligent cause? This amazing DVD explores these timeless questions and presents compelling evidence to support an idea that could revolutionize scientific thought - the theory of intelligent design.

For more than a century, Charles Darwin's theory of natural selection has defined biology. Yet today a growing number of scientists question its ability to account for the origin and diversity of life. This six- part series, containing excerpts from Unlocking the Mystery of Life, examines Darwinian evolution and presents to students a powerful challenge to its validity: the theory of intelligent design.

Flight: The Genius of Birds DVD

Metamorphosis: The Beauty and Design of Butterflies DVD