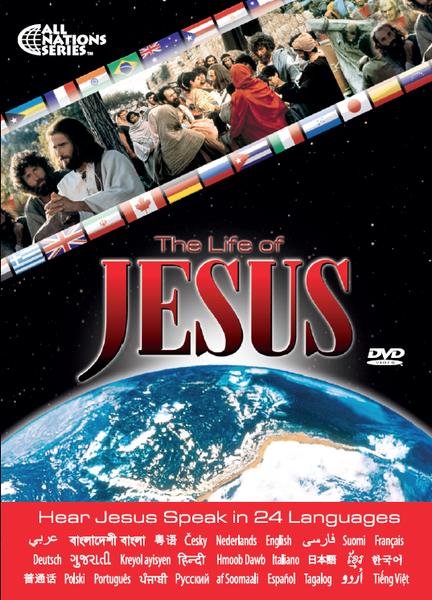 Since "The Jesus Film" debuted in English on Oct. 19, 1979, it has been translated into 1,463 languages and has been seen by more than 6 billion viewers from every country in the world. Out of the billions of people that have seen the film, there are a recorded 225 million that have indicated a decision for Christ.

"The most widely viewed film of all time. It is impossible to overestimate the important of this 1979 film, for it has made an impact in even the most primitive regions of the earth, places where men and women are only now hearing about Jesus for the first time. This definitive, rigorously scriptural movie version of the life of Jesus Christ has been seen by over five billion people around the globe, reaching 236 different nations in over 800 languages."
(D. G. - North Carolina)

"Biblically accurate. JESUS IS A BRILLIANT CINEMATIC ACHIEVEMENT ,AND THE PRODUCERS OF CERTAINLY MADE SURE THAT THEIR MOVIE WAS HISTORICALLY ACCURATE AS WELL AS ENTERTAINING. I WOULD NOT WASTE MY MONEY ON KING OF KINGS OR THE GREATEST STORY EVER TOLD. JESUS IS BASED ENTIRELY ON THE GOSPEL OF LUKE, NOT A HOLLYWOOD WRITER'S SCRIPT."
(D. D. - Berlin, NJ)

"Great for Children. I found this to be wonderful when I previewed it for my Sunday School Class. Very easy to show scenes if you don't have time for the whole movie. Excellent cinematography."
(T. L. - VA)

"Best Jesus movie ever! If there is any Jesus movie that touches the hearts of men, this one does. I bought three of these and play them so much, I want to make sure I have it a long time. The fact that the words are taken entirely from the Bible, and portraying the life of Jesus simply and accurately without added "Hollywood" glamour, tinsel and big-name movie stars distracting the meaningful intentions of this story: that of our Lord and Savior here in the flesh over 2,000 years ago."
(E. K. - Greenwich, CT)
×

Story of Jesus Through the Eyes of Children - 24 Language Edition

Magdalena: Through Her Eyes in 24 Languages DVD

Journeys to the Edge of Creation DVD