Be Amazed! Be Awestruck!
Explore the Scientific Evidence for Intelligent Design and Purpose in the Universe

Today, most scientists and philosophers claim that Earth is an ordinary speck of dust adrift, without purpose or significance, in a vast cosmic sea. This idea (popularized by the late astronomer, Carl Sagan) is an outgrowth of the naturalistic philosophy that has dominated science for the past 150 years. Yet, remarkable evidence--unveiled by contemporary astronomy and physics-may now tell a very different story.

Building upon the overwhelming success of Unlocking the 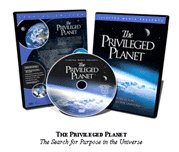 Mystery of Life (widely acclaimed as the most effective refutation of Darwinian theory, ever produced), Illustra Media presents The Privileged Planet.

This hour-long documentary explores the scientific evidence for intelligent design and purpose in the universe. In the process, Earth is revealed as far more than the product of time, chance, and random natural processes.

We now know that a rare and finely tuned array of factors makes Earth suitable for complex life. We depend on our planet's oxygen-rich atmosphere, its large moon, its planetary neighbors, and its precise location within the solar system and Milky Way galaxy. But the story does not end here. For, the same factors that make a planet like Earth hospitable to life also provide the best conditions for scientific discovery.

Is this correlation merely a coincidence? Or does it point to a deeper truth about the purpose of the cosmos and the reality of a transcendent designer? The answer could dramatically affect 21st century science.

Through stunning computer animation, interviews with leading scientists, and spectacular images of Earth and the cosmos, The Privileged Planet explores a startling connection between our capacity to survive and our ability to observe and understand the universe. A connection that points directly to the work of a creative mind and plan.

This extraordinary documentary will be a focal point in the escalating debate between evolution and design.

"Simple But Extremely Profound (with beautiful visuals) - I just borrowed this video and watched it. Initially I intended to do other things and have it on while I did some chores. But I was quickly drawn in, and my attention soon became undivided. This video is scientifically understandable and cinematically beautiful."
(A. T. - Los Angeles, CA)

"Very well produced! This is a beautifully done DVD, and is awe inspiring regardless of your philosophical viewpoint. While done primarily from an intelligent design viewpoint, it treats the other side fairly."
(E. M. - Norcross, GA)

"For what it's worth, I have both a Bachelor's and a Master's degree in biology, and have been a professional scientist for almost 15 years. I was not really raised a Christian, and was taught to be a Darwinian evolutionist/atheist in the secular universities that I attended (all scientific theories were to be questioned... except for Darwin's - his theory was off-limits). I now fully understand that Darwin's theory has been "protected" from rigorous scientific scrutiny - because if it were not, it would completely collapse due to lack scientific support for its most basic and fundamental principles. Your productions have played a major role in my understanding of this issue, and my personal journey in discovering the TRUE "origin of species". A weak, pseudo-science challenge to evolution would not have convinced me - but, the science behind your productions is first-rate, and would absolutely survive rigorous scrutiny (it definitely survived mine). Please don't underestimate the impact of your work. You guys are changing minds and hearts. Thank you for what you're doing, and please keep the productions coming...I look forward to adding the next one to my collection. "
(D.S. - CA)

"This is a well-made film with top-notch production values. It presents ideas about the universe that have caused a lot of controversy. The intelligentsia apparently see it as a threat to secular humanism and their outrage was so great they tried to ban public showings of this film at places like the Smithsonian."
(S. T. - CO)

"One OUTSTANDING Documentary! Viewing audiences will be treated to an intriguing discussion about the possibility of detecting purpose or design in nature. The movie summarizes and illustrates key points of The Privileged Planet hypothesis that was first presented by astrobiologist Guillermo Gonzalez and philosopher Jay Richards in their superb book of the same title. It functions as a wonderful companion to the book and also stands upon its own as an enjoyable, first-rate film. "The Privileged Planet" contains stellar animation and good accompanying music. The film features the unforgettable John Rhys-Davies (from Indiana Jones and LOTR fame) as narrator, and his incredible voice captivates you from the opening moments of the movie."
(S. C. - Seattle, WA)

"We thank you for your perseverence in following our Lord's will in producing such exquisitely presented education with a biblical perspective! I am a grandmother of 2, Chloe 5 and Jeremy 4. We have learned so much from each of your previous treasured dvd's (we have them all!). Chloe recognizes and basically understands DNA from your Unlocking The Mystery of Life DVD, and we were all enamored with the Privileged Planet, what a tremendous blessing you all are in His eyes and those that thirsted for such knowledge from our Creator's perspective! Because of your Icons of Evolution and Darwin's Dilemma they are aware of the fallacies and suppositions of the humanist's views...thank you for helping me to educate His precious one's with His Truth revealing the lies that satan plants, YOU ARE ALL LOVED!
(J.B. - CA)

"A beautiful, intelligent presentation. Thought-provoking... but only for the truly open-minded. If you've already got your mind made up on the larger questions of the cosmos, it will only unsettle you and make you think outside the box. For the open-minded, a truly satisfying, provocative experience."
(G. C. - FL)

Flight: The Genius of Birds DVD

Metamorphosis: The Beauty and Design of Butterflies DVD

Go2rpi.com is owned and operated by Randolf Productions, Ins.

Lorem ipsum is a pseudo-Latin text used in web design, typography, layout, and printing in place.

Get all the latest information on Event, Sales and Offers. Sign up for newsletter today.